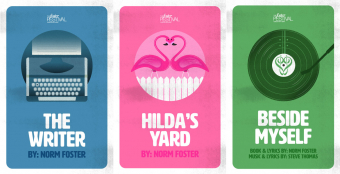 October 16, 2019 (St Catharines, ON) The Foster Festival is proud to announce the line-up for the 2019 season, which will once again feature two World Premieres written by Norm Foster, highlighted by the Festival’s first-ever original musical, co-written with long-time collaborator Steve Thomas. True to form, the festival’s fourth season will include three professional productions that will take the stage at Cairns Hall in The FirstOntario Performing Arts Centre (PAC) from June to August 2019.

The heartfelt World Premiere of THE WRITER will open the season on June 19. The second show will be HILDA’S YARD, a Norm Foster Greatest Hit starring Foster himself alongside Artistic Director Patricia Vanstone, running from July 10 until July 26. The second Foster World Premiere, and first Musical to grace the 4-year old Festival stage, will serve as the season finale; BESIDE MYSELF, co-written with Canadian composer Steve Thomas will play from July 31 until August 17.

“I've wanted to tackle a new musical for a while and the timing is perfect. Steve Thomas and I are having a ball with this story,” said Norm Foster, an Officer of the Order of Canada. “THE WRITER couldn’t be more different. It digs deep into a father and son’s complicated relationship.”

HILDA’S YARD features the return of Foster and Artistic Director Patricia Vanstone to the stage as Sam and Hilda Fluck. “Each season as I greet our evening audiences, I keep hearing that people loved us together in the Festival’s debut production of On A First Name Basis” Vanstone explained. “To play opposite Norm in this delightful and whimsical story is going to be a treat for us and for our audiences.”

For the first time, the Foster Festival will open up all 300 seats in their summer home Cairns Hall in the PAC.  “The Foster Festival has continued to grow year-over-year and we are preparing to meet the incredible audience demand,” explains Executive Director Emily Oriold “We’re looking forward to building on the popularity of our Fore and Aft Lounge and the popularity of our 2018 finale RENOVATIONS FOR SIX, which set records at the Box Office selling out nearly every performance.”

The 2019 season will feature a total of 56 performances over a 9-week run. Reserved seating and subscriptions will be offered for the entire season as well as a Pick 2 Pack, where theatregoers can select tickets to two of the three shows at a discounted price.

“People are primed for our fourth season because they know they’re in for a treat with definitive productions of Norm’s work,” said Vanstone. “At the end of our 2018 season, we were overjoyed with the enthusiasm our audiences displayed both inside the theatre and at the Box Office. We truly feel that we are firmly embedded in the cultural life of St. Catharines. We can’t wait for what 2019 will bring.”

Tickets are now on sale and can be purchased at fosterfestival.com.

THE WRITER:  World Premiere by Norm Foster - June 19 until July 5

The first of two world premieres in our 2019 season, The Writer tells the story of a renowned writer and his son, who has followed in his father’s footsteps, perhaps less successfully. As they sit together and examine their relationship, secrets are revealed and old wounds are reopened.  Full of compassion and Foster’s trademark Humour with Heart, The Writer explores the parent child connection with touching clarity as the paternal care-giver becomes the cared for.

Hilda and Sam Fluck are finally on their own after their grown children Gary and Janey leave the nest. They’re looking forward to rekindling their romance in their “Golden Years” but their love nest suddenly becomes a bit crowded with the unexpected return of the children and some very exotic visitors.  Set in 1956, this delightful comedy sparkles with unexpected twists and turns as Hilda attempts to corral her family’s foibles. Hilda’s Yard reunites Norm Foster and Artistic Director Patricia Vanstone as Sam and Hilda Fluck. Holy toot! You’re going to love it!

BESIDE MYSELF: World Premiere Musical by Norm Foster and Steve Thomas - July 31 until August 17

What would you do if you could hit the re-set button on a stale marriage?  Paula and Sam have finally decided to pack it in as a couple. As they divvy up the their household goods they wonder what would have happened if they’d never met. Would their dreams and young ambitions have come true? The discovery of a long-forgotten wedding gift sets off a chain of events that transports them back to their college days and the opportunity to rewrite their history together. Reuniting Norm Foster and composer Steve Thomas - co-creators of audience favourites Jasper Station, Race Day.

“We drive considerable distance facing terrible traffic jams along the QEW, but it is ever so worth it considering the talent on stage, and the sheer enjoyment of Foster's wit. The venue is perfect - especially with the addition of the Fore and Aft Lounge where one can relax before the show.” – yankeefan730, Burlington, ON (TripAdvisor)

“We went to see a new Norm Foster play called Renovations for Six at FirstOntario PAC. Norm Foster is always good, but, this time he outdid himself with a very funny play that most of us can identify with. The acting was magnificent…everyone was perfect in their parts. The theatre itself is modern and easy to navigate, with a very friendly volunteer staff, who go out of their way to make this event so pleasurable.” – Steve B, Sun City Centre, Florida (TripAdvisor)

“Back from the First Ontario Performing Arts Centre where the friendly box office staff fixed me up with our season’s tickets to the Foster Festival. Can’t wait to see what Norm Foster has up his creative sleeve this year!” – Mike S., St. Catharines, ON (Social Media)

What the critics say

"With plays and productions this good I’ll be making a trip to this festival next year for sure. It’s quite wonderful to see the whole community getting behind this endeavor. And why not. It’s terrific theatre; the casts and creative folks involved are top notch and the festival is dedicated to one of our most successful playwrights. We all win."
- Lynn Slotkin, Review, The Slotkin Letter

Established in October 2015, the Foster Festival is the only Canadian theatre festival to celebrate the work of a living playwright, Norm Foster. Foster is the most produced playwright in Canadian history, with his nearly 60 plays receiving an average of 150 productions each year across Canada and internationally. The Festival has attracted some of the best artists in Canada including film and television stars Peter Keleghan, Leah Pinsent Sheila McCarthy, Janet-Laine Green and Booth Savage. The Festival proudly partners with the City of St. Catharines, The Kristen French Child Advocacy Centre of Niagara, The Niagara Chapter of Native Women, The Niagara Children’s Centre and Rodman Hall to provide theatre arts to the Niagara region. Our Local Heroes Initiative provides free tickets to clients of Bethlehem Housing and Support Services and their community partners. Visit www.fosterfestival.com to learn more.

The Norm Foster Theatre Festival held its Annual General Meeting last night reporting to its supporters on the Festival's 4th season. Those in attendance (virtually) accepted the audited financial statements presented for the 2019 fiscal year, documenting a small surplus. The Board of Directors also welcome six new Board Members to the Festival's Board of Directors effective August 12, 2020