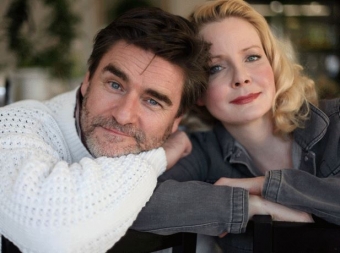 St. Catharines, Ontario – May 30, 2018 – The Norm Foster Theatre Festival (“Foster Festival” or the “Festival”) is proud to announce the casting of PETER KELEGHAN, star of Canadian film, stage, and television. Keleghan will join the Festival’s stellar company of actors for the final production of the 2018 season: the World Premiere of RENOVATIONS FOR SIX.

One of Canada’s busiest actors, Keleghan is an 18 time Gemini Award nominee and a five-time winner in the category of Best Performance in a Comedy Program or Series for his roles as the self-absorbed Jim Walcott in The Newsroom, and the vain Alan Roy in Made In Canada. Audiences loved him as Ranger Gord in The Red Green Show and in 2011 Keleghan won best performance in a comedy series for playing Ben in 18 To Life. South of the border, he has guest starred in some of American television’s most popular series including Seinfeld, Murphy Brown, and Cheers.

“With Peter Keleghan playing opposite his partner Leah Pinsent in this phenomenal cast, the Festival is continuing its tradition of capturing the incredible chemistry of real-life married couples onstage,” said Artistic Director Patricia Vanstone. “They are the perfect fit to premiere these roles in the first Foster play to represent the LGBTQ community. We can’t wait to watch these characters grapple with riveting heartache and raucous humour related to sexual identity in this beautiful story.”

Keleghan will play the role of Maurice Dudet opposite his real-life partner LEAH PINSENT as Veronica Dunn-Dudet. In doing so, they will become the third married couple to grace the Festival’s stage, preceded by Janet-Laine Green and Booth Savage in the 2017 production of Old Love, and Melanie Janzen and Jamie Williams in the 2016 production of Here On The Flight Path.

The star studded cast of Renovations for Six also features WES BERGER and COSETTE DEROME as the hosting couple, along with Shaw Festival stars NORA MCLELLAN and WILLIAM VICKERS as Billie and Wing.

Having appeared on the cover of MacLean’s magazine and been called ‘the funniest man in Canadian television’ by The Toronto Star, Keleghan was voted one of the “Top Ten Funniest People In Canada” in 2003 by Star TV. While Razor Magazine labeled him one of the eight ‘cutting edge performers of Hollywood North’ his early career included seasons at the Shaw and Stratford Festivals.

Contemplating a return to the stage he says, “As Leah was preparing to read for Veronica, I thought, ‘wow, this play would be such fun to do! I’m so glad my shooting schedules for Murdoch Mysteries and Workin’ Moms allowed me to join the Foster Festival.’ I’ve always admired Norm Foster’s work and unique ability to make audiences laugh and cry with his iconic Humour with Heart.”

About Renovations for Six

The second World Premiere of the 2018 season, Renovations For Six features three couples, all at different stages in their lives. Shayna and Grant Perkins are new in town. Eager to make friends, the young couple decides to host a cocktail party. The guest list includes Billie and Wing Falterman who abandoned their show biz career to raise their daughter, and haughty psychiatrist Veronica Dunn-Dudet and her husband Maurice Dudet, a wannabe novelist. All three couples are undergoing home renovations and could use a little fix-up in their relationships too. Chaos ensues at the cocktail party in this fast-paced comedy as secrets are revealed and cultures clash.

The Foster Festival, established in October 2015, is the only Canadian theatre festival to celebrate the work of a living playwright. Norm Foster is the most produced playwright in Canadian history, with his nearly 60 plays receiving an average of 150 productions each year across Canada and internationally. The fully professional Foster Festival has attracted some of the best artists in Canada including star of stage and screen Sheila McCarthy and the multi-talented Lisa Horner. In addition to working closely with the City of St. Catharines, The Festival also partners with The Kristen French Child Advocacy Centre of Niagara, The Niagara Children’s Centre and Rodman Hall to provide theatre arts to the Niagara region.

The Norm Foster Theatre Festival held its Annual General Meeting last night reporting to its supporters on the Festival's 4th season. Those in attendance (virtually) accepted the audited financial statements presented for the 2019 fiscal year, documenting a small surplus. The Board of Directors also welcome six new Board Members to the Festival's Board of Directors effective August 12, 2020