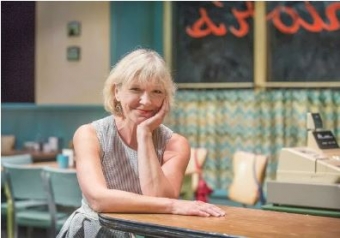 Canadian TV stars and Shaw Festival veterans will join The Foster Festival for its second season in St. Catharines.

Green, a three-time Gemini nominee, played Mayor Iris Peters in the Canadian sitcom She’s the Mayor and as Judge Serkis in the CBC legal drama This is Wonderland.

“(They) are going to melt hearts,” says Vanstone, who directs all three shows of the festival’s sophomore season. “I can’t wait to get in the rehearsal room with these two stars of stage and screen.”Longtime Shaw Festival performers Peter Krantz and Catherine McGregor will joins Niagara actress Melanie Janzen - returning from last season - for the world premiere of Foster’s Lunenberg, opening in August.

The season will kick off with another Foster world premiere, the fast-paced spoof Screwball Comedy in June. It will feature Eliza Jane Scott and Kevin Hare playing a total of seven roles. “They are going to be pulling off a real high-diving act,” says Vanstone. “Both are brilliant comedians with years of experience across the country, from Edmonton to Charlottetown.”

The show also stars Joanna Douglas and Darren Keay, who is returning to the Foster Festival after melting hearts in last year World Premiere production, Halfway to the North Pole.

“His beautiful set last summer for our first show, On a First Name Basis, had our audiences enthralled,” says Vanstone. “How he integrated design elements of Cairns Hall into the set brought an intimacy to the show and showcased the incredible beauty of our performance space.”

The Foster Festival is the first theatre company devoted to the work of Canadian playwright Norm Foster. Tickets are available online at firstontariopac.ca.

A Message to our Patrons from The Norm Foster Theatre Festival

The Foster Festival is working to ensure our approach to the outbreak of COVID-19 pandemic and its resulting repercussions on our patrons, our team members and our local community is handled with care and consideration.   Based on the guidance of the provincial and federal governments, along with the Chief Medical Officer of Canada, The Foster Festival is suspending all public events and performances, most notably, the 2020 summer season of plays to be held June 24 to August 22 at the Fir...

Foster Features - Stone Mill Inn, one of our favourite places to stay in Niagara!

Check out this Foster Festival Feature where we visit the Stone Mill Inn, one of our favourite places to stay in St. Catharines.