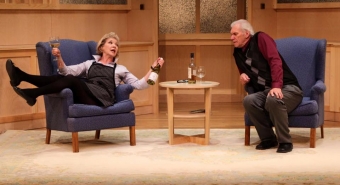 The Foster Festival's production of Norm Foster's On A First Name Basis named one of the Best Productions of 2016.

Christopher Hoile of Stage-Door.com chose 10 productions of 2016 that he felt were the best of the best - outside of Toronto and the two major theatre festivals. The Foster Festival's production of On A First Name Basis made the list!

On a First Name Basis by Norm Foster, Foster Festival, St. Catharines. The new Norm Foster Theatre Festival is not only the first festival devoted to the plays of a Canadian, but the first devoted to those of a living Canadian playwright. This play, the Festival opener, starred Foster himself and proved, if any proof were necessary, why Foster is the most produced of all Canadian playwrights. The interplay between Foster and Patricia Vanstone as an author and the housekeeper he has employed but ignored for 20 years begins in hilarity but ends with the wistful realization of two people who may have maintained their façades vis-à-vis each other for too long.

Thank you to Mr. Hoile for choosing our production as one of the best of 2016!